Steven Bonk Acclaimed as the Saskatchewan Party Candidate for Moosomin 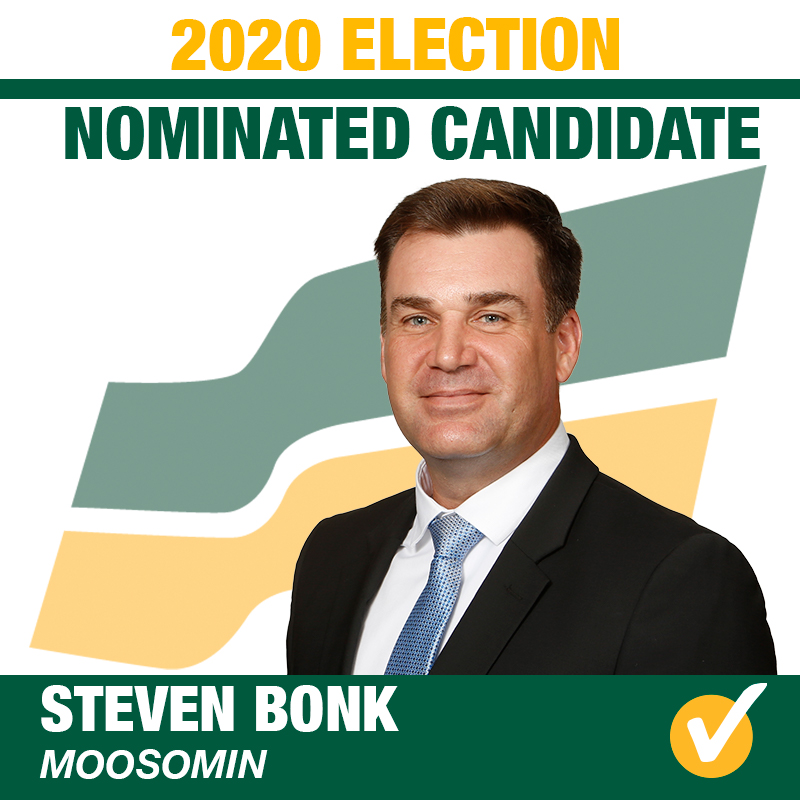 Wolseley, SK – Steven Bonk was acclaimed as the Saskatchewan Party candidate for the constituency of Moosomin in the upcoming 2020 provincial election.

“It has been a great honour having been able to represent the constituents of Moosomin since 2016,” said Bonk, “To have the full support of Saskatchewan Party members is encouraging for our party as we head towards the 2020 election.”

Since first being elected in 2016, Bonk has served Saskatchewan as Minister of the Economy and Minister responsible for Tourism Saskatchewan, Innovation and Trade. He has also served as a member of the Standing Committee on the Economy, the Public Accounts Committee, Treasury Board, and as Chair of the caucus Legislation and Regulation Review Red Tape Committee.

Bonk pointed to the many improvements in the Moosomin constituency and all across Saskatchewan as his reasons to run again.

“There have been significant improvements made to this constituency since the Saskatchewan Party formed government, including better and more stable healthcare services, improved highways, and a continued, steadfast support for those working in the agricultural and resource industries.”

“In the Moosomin constituency, we have oil, gas, mining, pipelines, agriculture, and world class manufacturing. These industries rely on trade and exports. I am proud that our government has been relentless in our efforts to open new markets for our products”.

“Beyond the government investments, I also know that Saskatchewan has a great leader in Premier Scott Moe,” Bonk continued. “Scott will always stand up for the people of this great province, and I am proud to stand with him.”

Steven, his wife Candace, and their daughter, Emma, have strong ties to the Moosomin constituency. They are the fifth generation of his family to reside there.

The Saskatchewan Party has now nominated 29 candidates in advance of the October 2020 provincial election.

The next nomination meeting will be held in the constituency of Batoche on March 5, 2019.