70 Per Cent in Saskatchewan Support Wall's Position on Carbon Tax 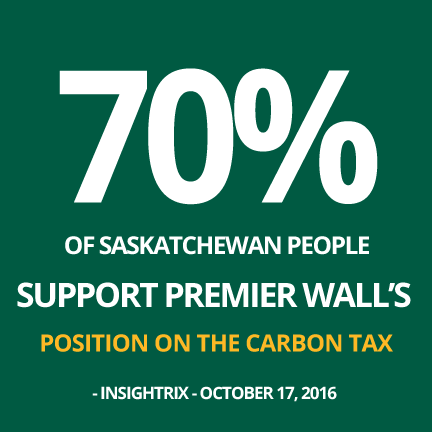 A new Insightrix poll commissioned by the Saskatchewan Party shows that seven out of 10 Saskatchewan people support Brad Wall's position over Justin Trudeau's position on a national carbon tax.

Of those who have an opinion (85 per cent of all those surveyed), 30 per cent support Trudeau's plan to impose a national carbon tax on provinces that don't enact their own carbon pricing model by 2018, while 70 per cent support Wall's opposition to a carbon tax in Saskatchewan.

Wall has said climate change policy should focus on innovation and adaptation, not taxation.  Wall will outline the Saskatchewan government's position in greater detail tomorrow when he releases a white paper on climate change.

Questions were asked on Insightrix Research’s monthly omnibus survey and includes the opinions of 800 randomly selected residents who are members of its online panel, SaskWatch Research®.  Quotas are set by age, gender and region to match the distribution of the population of Saskatchewan.  Data were collected between October 12 and 16, 2016.  Because the survey was conducted online, margins of error do not apply.