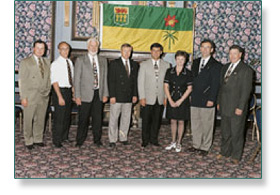 In the spring of 1997, a small group of Progressive Conservative and Liberal MLAs launched a landmark initiative that would forever change the face of Saskatchewan politics.

They began talks with other Conservatives, Liberals, federal Reformers and like-minded individuals to create a new party that could rally the growing sentiment for change in Saskatchewan under a single party banner.

Here are some other dates of importance in the Party's history:

August 11, 1997: Ken Krawetz selected by the Caucus to serve as Interim Leader.

September 17, 1997: After a petition drive to receive the required 2,500 signatures, the Chief Electoral Officer of Saskatchewan registers the Saskatchewan Party as an official political party.

November 14, 1997: The Saskatchewan Party holds its Founding Meeting in Saskatoon. Participants establish the Party's initial policies and a draft constitution.

June 28, 1999: Wayne Elhard wins a by-election in Cypress Hills and becomes the first MLA to be elected under the Saskatchewan Party banner.

October 4, 2002: Jason Dearborn is elected in the Kindersley by-election.

November 5, 2003: The Saskatchewan Party captures 28 seats in the 2003 Provincial Election.

September 21, 2004: Brad Wall releases his economic vision, The Promise of Saskatchewan: A New Vision For Saskatchewan's Economy, to a Commerce class at the University of Saskatchewan in Saskatoon.

February 6, 2005: A policy renewal package is debated and passed by party membership at the 2005 Annual Convention.

March 5, 2007: Nancy Heppner, daughter of the late Ben Heppner, is elected in the Martensville by-election. 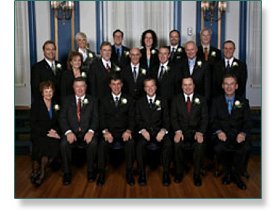 October 21, 2010: Premier Brad Wall stands up for Saskatchewan’s strategic potash resources, declaring the hostile takeover does not provide a net benefit to the province and the country.

November 8, 2011: The Saskatchewan Party government keeps its first promise made in 2011 provincial election by expanding the PST exemption on children’s clothing.

October 16, 2012: Premier Brad Wall announces the Saskatchewan Plan for Growth, a vision for a province of 1.2 million people by 2020. The plan is the government’s roadmap to ensure growth continues, to meet the challenges of a growing province and to ensure all Saskatchewan people are enjoying the benefits of growth.

March 14, 2013: The Saskatchewan Party purchased and moved into its new home office, located at 6135 Rochdale Blvd. in Regina, SK.

April 28, 2014: Deputy Premier and Minister of Finance Ken Krawetz announced he will not seek re-election in the next provincial election expected in April of 2016.  Krawetz is the MLA for the Canora-Pelly constituency and a founding member of the Saskatchewan Party.

April 30, 2014: Social Services Minister June Draude announced she will not seek re-election in the next provincial election expected in April of 2016.  Draude is the MLA for the Kelvington-Wadena constituency and a founding member of the Saskatchewan Party.

July 8, 2014: Former Speaker of the House and MLA for the Moosomin constituency Don Toth announced he will not seek re-election in the next provincial election expected in April of 2016.  Toth was first elected in 1986 and is a founding member of the Saskatchewan Party.

April 29, 2015:  Cypress Hills MLA Wayne Elhard announces he will not be seeing re-relection in 2016.  Wayne was the first elected Sask Party MLA.

April 4, 2016: The Saskatchewan Party led by Premier Brad Wall is re-elected and forms a majority government, winning 51 of 61 seats.