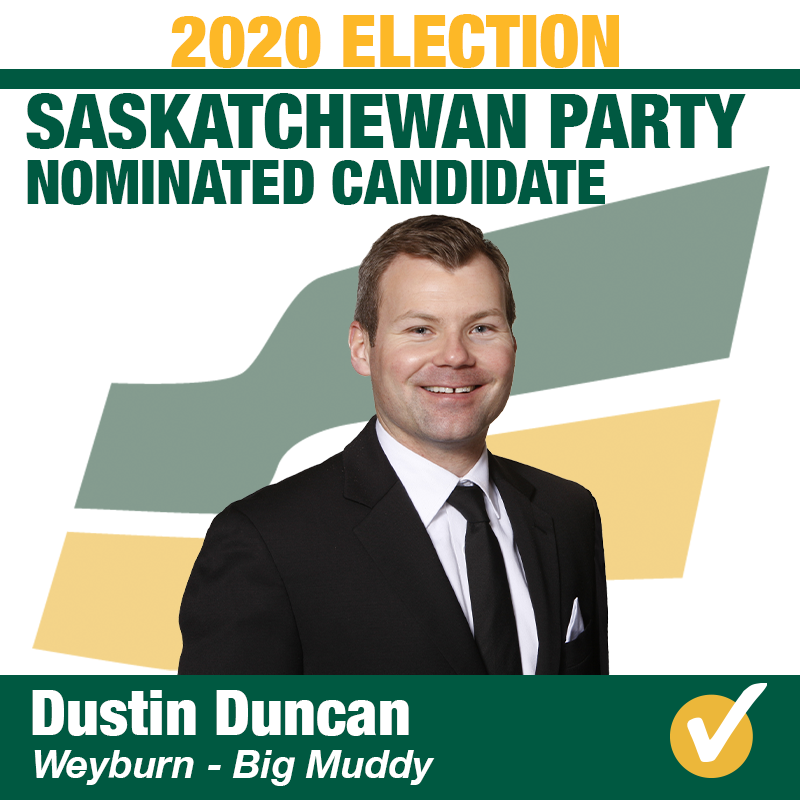 Weyburn, SK – Tonight, Dustin Duncan became the most recent Saskatchewan Party MLA to be nominated again for the 2020 provincial election. Duncan was nominated as the Saskatchewan Party’s candidate for Weyburn – Big Muddy, the constituency he has represented since 2006.

“I’m honoured to receive the support and encouragement to run again in this great constituency,” Duncan said. “Thank you to all of the Saskatchewan Party members in Weyburn-Big Muddy that have worked so hard on behalf of our party for many years now. I’m looking forward to representing this area again after the 2020 election.”

Duncan was first elected in a by-election in 2006, and re-elected in the 2007, 2011, and 2016 provincial elections. During his time in government, Duncan has served as Minister of Tourism, Parks, Culture, and Sport; Minister of Environment; Minister of Health; and Minister Responsible for SaskPower, SaskTel, and Water Security Agency, as well as various other files.

Duncan noted that Weyburn-Big Muddy is a particular area in Saskatchewan that needs the support of the provincial government right now.

“Given the importance of oil and gas and agriculture in this part of Saskatchewan, and the attacks on those industries we’ve seen recently, there’s no chance that an NDP government led by Ryan Meili would ever be concerned with what’s going on down here,” said Duncan. “Ryan Meili and the NDP support a carbon tax and they oppose pipeline development; imagine what the quality of life in Weyburn-Big Muddy would be like if these critical industries didn’t have someone standing up for them?”

“On the other hand, Premier Moe, the Saskatchewan Party, and I will always stand up for the families, businesses, and jobs in this constituency - that’s why I’m honoured to run for this party again in 2020.”

Duncan and his wife Amanda have three young children.

The Saskatchewan Party has now nominated 47 candidates in advance of the 2020 provincial election.