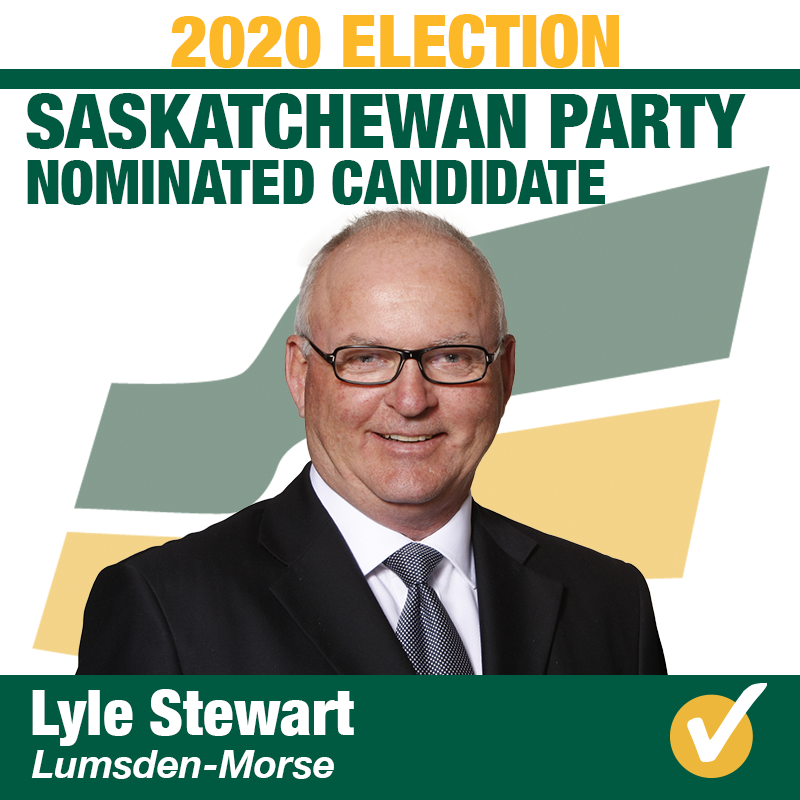 Rouleau, SK – Tonight, long-time MLA Lyle Stewart was nominated as the Saskatchewan Party’s candidate for Lumsden-Morse in the upcoming 2020 provincial election. This will be Stewart’s sixth time running, after being elected in the 1999, 2003, 2007, 2011, and 2016 elections.

“It’s a great honour to once again receive the support of the many members in the Lumsden-Morse constituency,” said Stewart. “After all these years, I really am quite humbled to receive the encouragement to put my name forward again and continue to represent this constituency and the Saskatchewan Party.”

Since he was first elected as an MLA in 1999, Stewart as the interim leader of the party, as well as the critic for Agriculture, Economic Development and Industry and Resources.

After the Saskatchewan Party formed the government in 2007, Lyle served as the Minister for Enterprise and Innovation, chair of the Legislature's Standing Committee on the Economy, and as a member of Treasury Board. Lyle was also the Minister of Agriculture and Minister Responsible for Saskatchewan Crop Insurance Corporation, a role in which he served for over six years. He currently serves as Legislative Secretary to the Minister Responsible for Water Security Agency.

Stewart noted that, despite some health challenges in recent years, he’s ready to run a strong campaign with Premier Scott Moe in the 2020 election.

“In the upcoming provincial election, there’s going to be a pretty clear choice: electing a strong premier like Scott Moe who will keep standing up for Saskatchewan and our interests, or electing a weak and out of touch leader like Ryan Meili, who supports a carbon tax and is lukewarm at best on pipelines.”

“In my opinion, the choice is pretty clear. I’m looking forward to getting out on the doorsteps and around my constituency with Premier Moe as we get closer to the election.”

Lyle and his wife Linda have three grown children and six grandchildren.

With Stewart’s nomination the Saskatchewan Party has nominated 45 candidates in advance of the 2020 election.