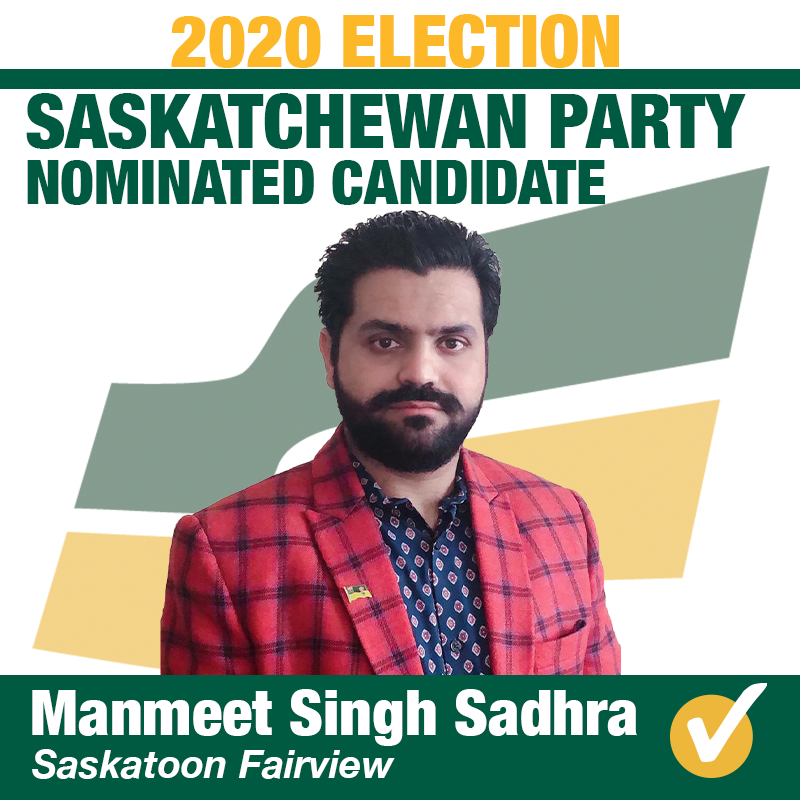 Saskatoon – This evening, Manmeet Singh Sadhra was nominated by Saskatchewan Party members to be the candidate for Saskatoon Fairview in the upcoming October provincial election. Sadhra defeated one other candidate to claim the nomination.

“It’s an honour to be nominated as this great party’s candidate for Fairview,” said Sadhra. “I look forward to representing this constituency well in October’s election, and hopefully the honour of representing all constituents in Fairview as their MLA.”

Sadhra said that Fairview will be a strong constituency with a Saskatchewan Party MLA at the government table, and says that he will be proud to represent the diverse and continually growing area that Fairview represents.

“It’s very important that we ensure that Fairview gets the representation and the voice that it deserves, and that we make sure the community keeps seeing the benefits of Saskatchewan’s growth. I look forward to getting to work after an election win in October.”

Sadhra also said he’s looking forward to standing with Premier Scott Moe during the election, and supports his strong leadership and vision for continued growth in Saskatchewan.

“Premier Moe is a great leader for our province, and I am personally very glad that he is leading the way – not just here in Saskatchewan – but he is also a leader in Canada, too.”

“With Premier Moe’s strong leadership, I know that we will continue to have a strong Saskatchewan.”

Sadhra was born and raised in India (Punjab) before immigrating with his parents to Canada in 2005. Since 2009, he has owned and operated a business in Saskatchewan. Sadhra and his wife have two children and live in the Kensington neighbourhood in Saskatoon.

With Sadhra's nomination, the Saskatchewan Party has now nominated 52 out of 61 candidates in advance of the fall election.