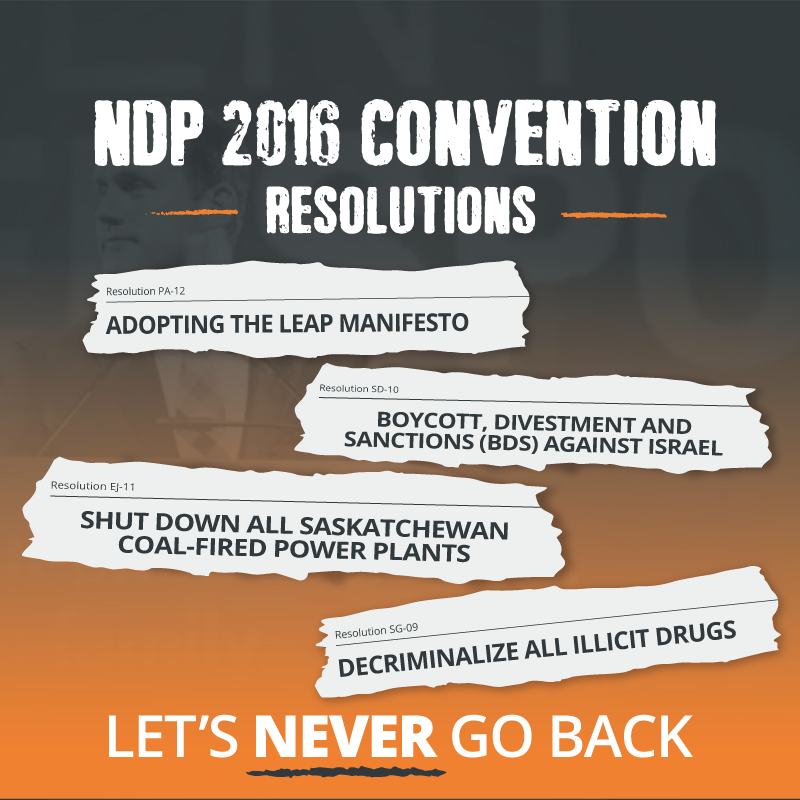 The NDP's provincial convention is this weekend.  Once again, they will be debating policies that should how increasingly out of touch they are with Saskatchewan people. These include boycotting and sanctioning Israel, shutting down all coal-fired power plants, decriminalizing all illicit drugs and supporting the LEAP Manifesto that would shut down the energy industry in Canada.

These are actual resolutions from the NDP convention package:

BE IT RESOLVED that the Saskatchewan NDP will recognize the Boycott, Divest, and Sanction movement as a means to work towards promoting Human Rights; and

BE IT FURTHER RESOLVED that the Saskatchewan NDP will honour the Boycott, Divest, and

Sanction movement until it's goals are achieved.

BE IT FURTHER RESOLVED THAT in preparation for the decommissioning of the remaining coal-fired power plants, a Saskatchewan NDP government would invest in a mix of renewable power, co-generation of electricity, natural gas-fired electricity, and conservation measures with a focus on creating mortgage-paying, sustainable jobs.

BE IT FURTHER RESOLVED THAT an NDP Government, when elected, would transition out of

conventional coal-fired power within 2 terms, and would not build any new coal-fired CCS

plants due to cost considerations.

BE IT RESOLVED that the Sask NDP encourages the Canadian government to decriminalize all illicit substances.

BE IT RESOLVED that the Saskatchewan NDP will adopt the LEAP Manifesto on a Provincial level.