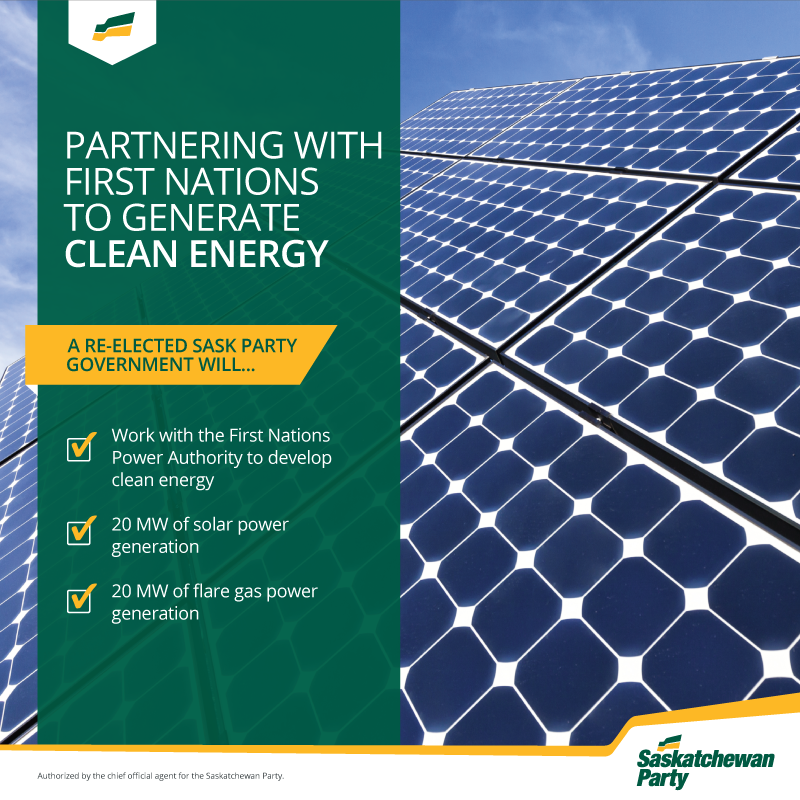 Premier Brad Wall today announced that a re-elected Saskatchewan Party government will partner with the First Nations Power Authority (FNPA) to engage First Nations in the development of 40 megawatts (MW) of clean energy generated from solar power and flare gas.

“This partnership will ensure that First Nations in our province are active participants in the economic benefits associated with the construction of clean energy generation in our province,” Wall said.

Projects for the 40MW of clean energy to be developed through the FNPA partnership will consist of:

FNPA CEO, Leah Nelson Guay said, “FNPA is early in the process of advancing solar projects. These are a starting place. First Nations renewable energy provides a local economic solution to both climate change and new energy needs in Saskatchewan.”

FNPA has identified the Flying Dust First Nation as its partner for the flare gas generation power project.  This project will involve capturing gas from oil and gas operations that would otherwise be flared into the atmosphere as carbon dioxide and using it to generate electricity.

FNPA will seek First Nations partners to construct a total of 20MW of solar power generation projects.  SaskPower will work with FNPA to negotiate power purchase agreements for the electricity generated from the solar and flare gas projects.

The Government of Saskatchewan has set a target to double the percentage of renewable electricity generation in Saskatchewan from 25 per cent today to 50 per cent by 2030.