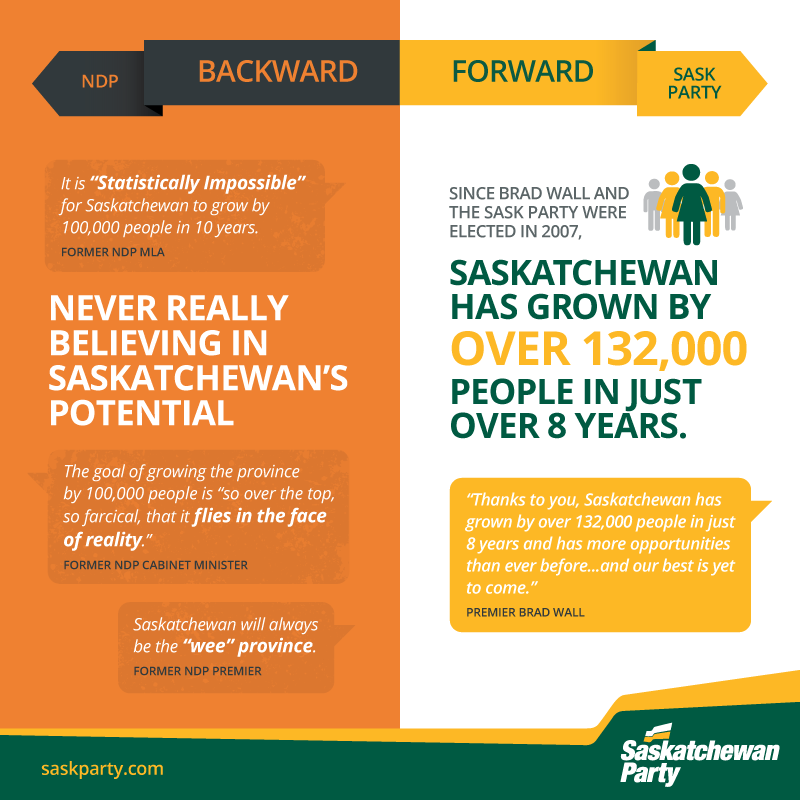 “WE ARE NOT GOING BACK.  LET’S KEEP SASKATCHEWAN STRONG.”

Premier Brad Wall addressed a large crowd of enthusiastic supporters today in Saskatoon.  Wall said the Saskatchewan Party will keep Saskatchewan strong and urged voters not to go back to the way things were under the NDP.

“I remember about a decade ago listening to a speech in the Legislature by an NDP Minister who said the Saskatchewan Party’s plan to grow the province by 100,000 people in 10 years was ‘farcical,’ Wall said.  “I remember another NDP MLA who said it was ‘statistically impossible.’

“But you believed something different about our province, didn’t you?” Wall told the crowd.  “Because this is Saskatchewan.  Our best days will always be ahead of us.  And for the better part of a decade, you have been proving that the NDP and their defeatist attitude were dead wrong.”

Wall noted the dramatic differences in the provincial economy since 2007 when the Saskatchewan Party was first elected.

“Under the NDP, we lost an entire generation of young people.  56,000 more people moved out of Saskatchewan than moved in.

“Since 2007, Saskatchewan has grown by 132,000 people – far exceeding the goal that the NDP called ‘farcical’ and ‘impossible.’  Today, despite challenges in the energy sector, our economy is more diversified and resilient than it has ever been, and we continue to grow at one of the strongest paces in Canada.  We are not going back.”

Wall said the Saskatchewan Party will continue to follow its Growth Plan and in this election has offered a responsible, affordable platform that will keep Saskatchewan strong.

“In the final days of the campaign, we will continue to present the choice: the NDP, with their damaging record in government and their current campaign, which is little more than a list of angry complaints and uncosted, deficit-spiraling promises – vs – the Saskatchewan Party, with a proven record of growth and an affordable, responsible plan to keep Saskatchewan strong.

“We are not going back to the way it was under the NDP.  Let’s keep Saskatchewan strong.”