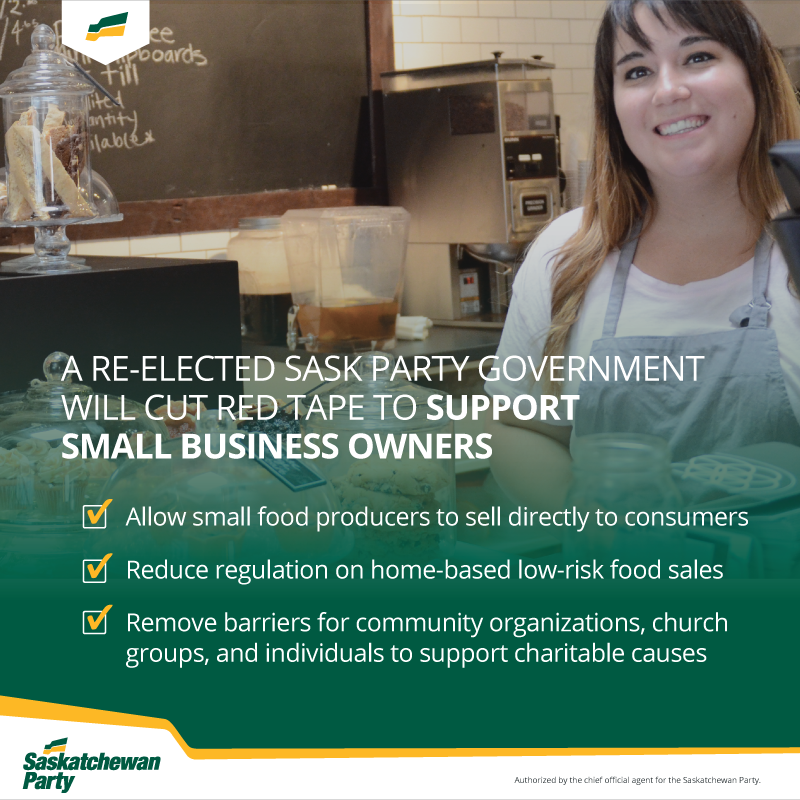 Prohibitions against advertising the sale of these foods will also be removed, providing home-based food businesses with increased access to customers and the opportunity to promote their products to consumers in Saskatchewan.

Currently, home-based food producers are prevented from selling directly to consumers or advertising other than by word of mouth or at farmers’ markets.  Even a Facebook post about their products could be considered illegal advertising.

“The government shouldn’t be getting in the way of a church group, community organization or individual who wants to make some money by selling home-made baked goods,” Wall said.  “Other jurisdictions have arrived at common sense solutions that still protect public health and we should do the same.”

Under the new regulations, only “low risk” foods may be sold.  In practical terms, this includes all non-perishable foods that you would normally not require refrigeration.

42 US states have introduced cottage food laws that allow home-based food businesses to sell low-risk foods directly to consumers. In California alone, these changes have resulted in the creation of over 1200 homemade food businesses.

These new regulations in Saskatchewan would be consistent the Saskatchewan Party government’s record of reducing regulation and unnecessary red tape on small business.  For instance, in November of 2013, the Saskatchewan Party government also announced 77 common sense changes to outdated liquor regulations. These included allowing spas and salons to serve alcohol to customers and allowing golf course to sell beer to golfers, without having to open the bottle or can before sale.

As a result of the government’s efforts to reduce unnecessary regulation, the Canadian Federation of Independent Business awarded Saskatchewan a “B” grade in its 2014 and 2015 Red Tape Report Cards.

“Making it easier for small business to do business – it’s part of our plan to keep Saskatchewan strong,” Wall said.