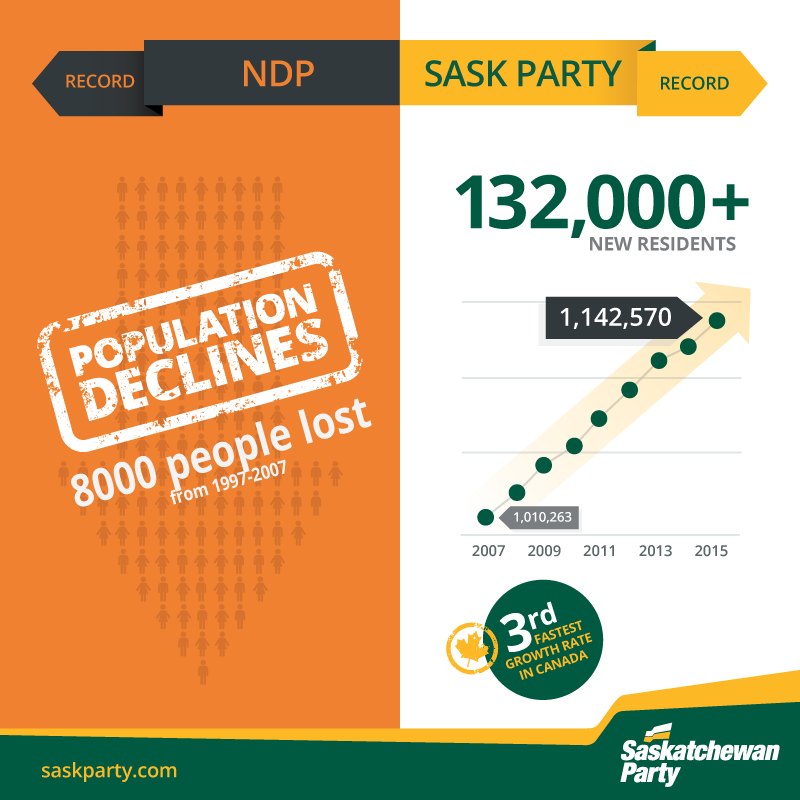 Saskatchewan’s population continues to grow at a strong pace, according to new information released today by Statistics Canada.

In the eight years since the Saskatchewan Party was first elected, Saskatchewan has grown by over 132,000 people.  That’s a sharp contrast from the previous decade under the NDP, when Saskatchewan’s population actually declined by 8,000 people.

“The NDP said it was ‘statistically impossible’ for Saskatchewan’s population to grow by 100,000 in 10 years,” Wall said.  “Saskatchewan has exceeded that goal by a long shot in the past eight years and in on track to hit our new Growth Plan goal of 1.2 million people by 2020.”

“The NDP always governed for decline.  That’s why they closed 52 hospitals, 176 schools and 1,200 long-term care beds for seniors,” Wall said. “That’s why they raised taxes 21 times, because a declining tax base meant everyone had to pay more.

“Today, our growing population means we have much different challenges and we are addressing those challenges.  Our diverse economy continues to create new opportunities for Saskatchewan people.  We are building new hospitals, building new schools, fixing more highways, retaining and recruiting more doctors and nurses.  The Saskatchewan Party has a plan for growth.”

In the eight years since the Saskatchewan Party was elected, the province has grown by more than in the previous 75 years.

“Let’s never go back to the way it was under the NDP,” Wall said.  “Let’s keep Saskatchewan growing and strong.”