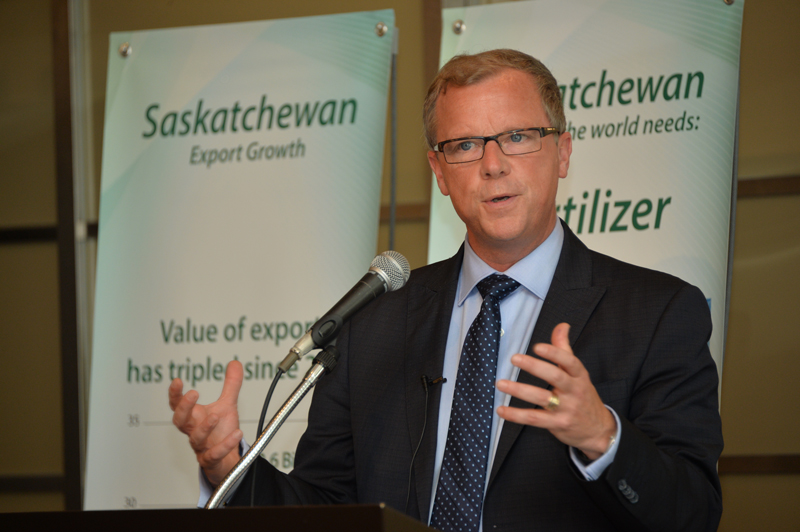 Premier Brad Wall today said an important question in the April 4 election is – who will stand up for Saskatchewan’s interests?

Wall said his government has a strong record of promoting Saskatchewan around the world and of standing up for Saskatchewan’s interests at the national level.

Wall made the comments during a visit to the AGT Food and Ingredients processing plant in Regina.  AGT buys lentils, peas, beans and chickpeas for processing and sells its products around the world.

“It wasn’t too long ago we had an NDP Premier who refused to join an Asian trade mission because he considered that region of the world to hold little positive impact for Saskatchewan or its economy,” Wall said.  “Since 2007, Saskatchewan’s exports to China are up by 293 per cent, to India up 215 per cent, to Indonesia up 123 per cent and to Japan up 40 per cent.  Let’s never go back to an NDP government that doesn’t think Saskatchewan has much to offer the world.”

Wall said the Saskatchewan Party government has a strong record of standing up for Saskatchewan on many other issues as well.

“We have consistently stood up for pipelines projects.  The provincial NDP have been lukewarm supporters of pipelines at best, while the federal NDP and its leader have opposed projects like Keystone XL.

“We recently made a proposal to the federal government to help laid off oilfield workers get back to work through an Accelerated Well Clean-Up program, which was supported by the Petroleum Services Association of Canada and even by the Alberta government.  The Saskatchewan NDP opposed this idea.”

Wall contrasted the Saskatchewan Party government's strong record of standing up for the agriculture and resource sectors compared to the NDP.

"Cam Broten had to dump two nominated NDP candidates, one who wanted to shut down the uranium industry and another who called farmers ‘stupid.’” Wall said.